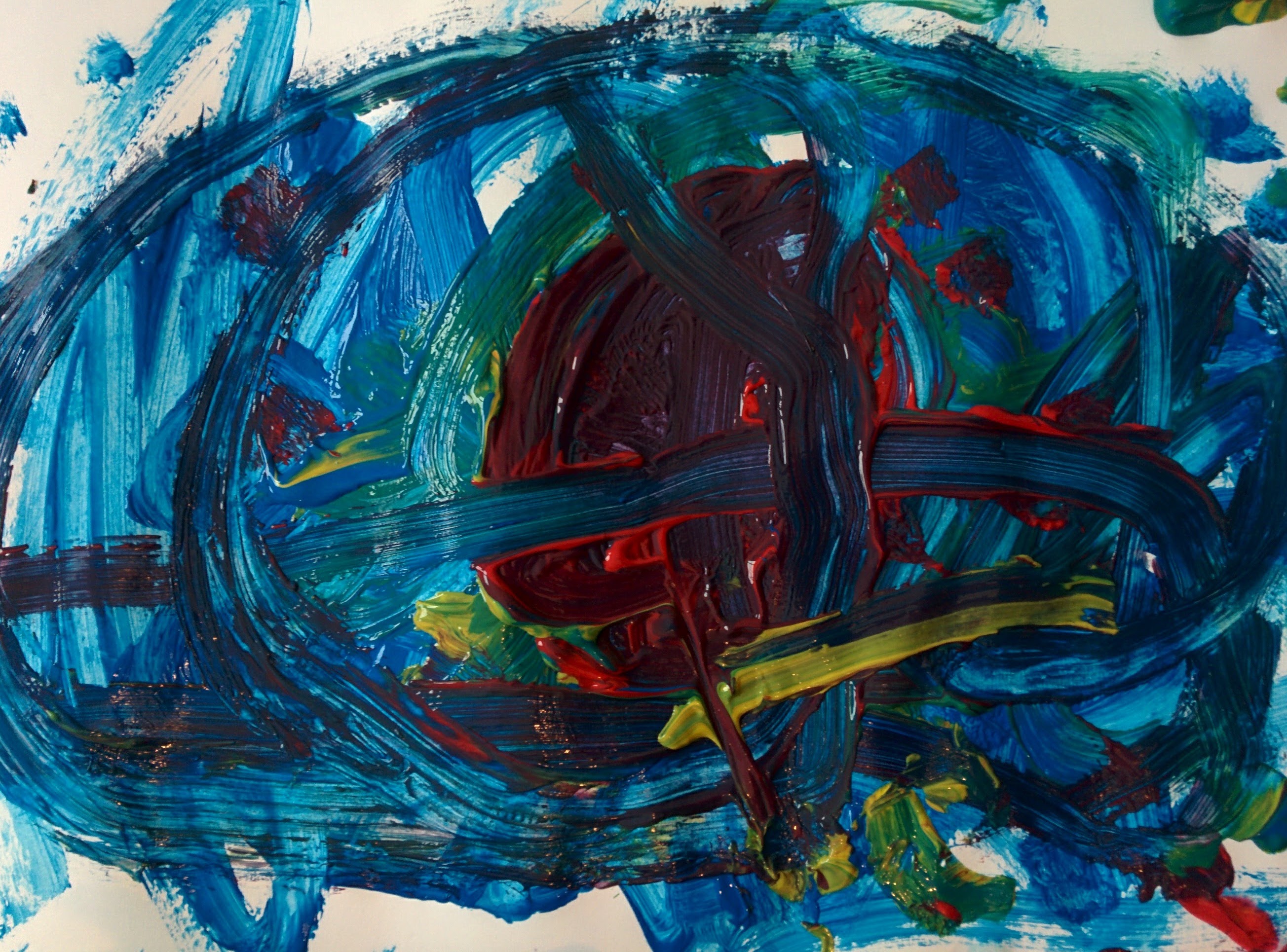 Shading values/areas under the normal curve is a quite frequent taks in eg educational contexts. Thanks to Hadley in this post, I found this easy solution. 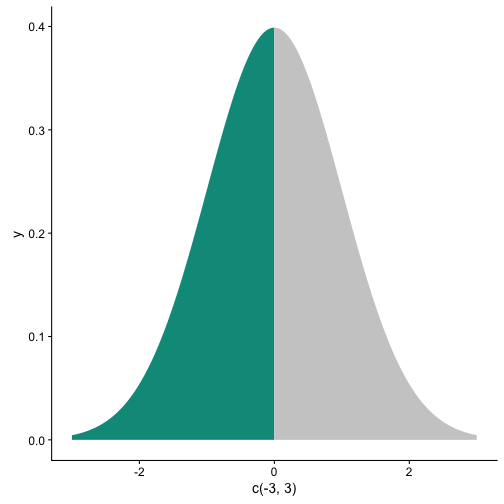 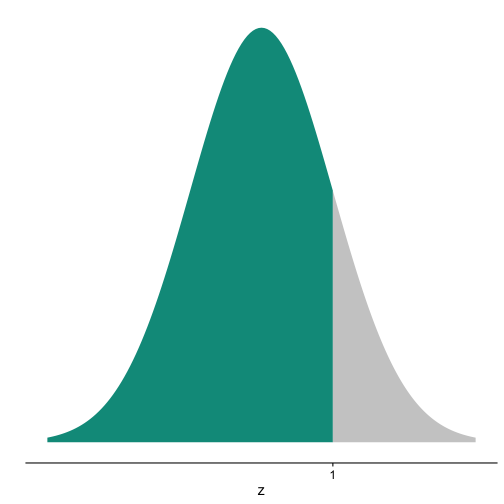 And some other quantiles: 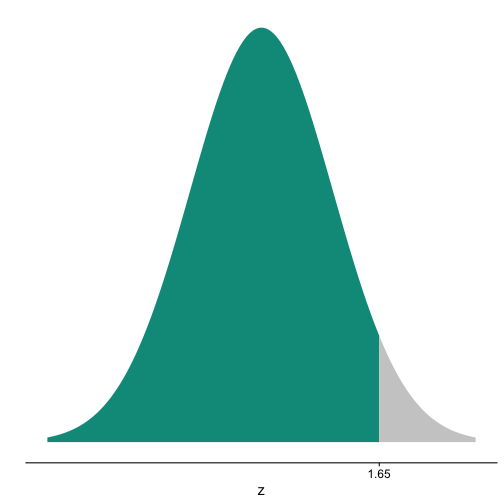 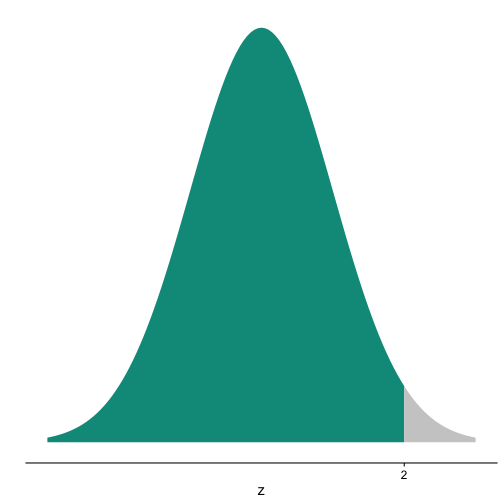 More on programming with dplyr: converting quosures to strings

In this post, we have programmed a simple function using dplyr’s programming capabilities based on tidyeval; for more intro to programming with dplyr, see here.

In this post, we’ll go one step further and programm a function where a quosure will be turned to a string. Why this? Because quite a number of functions out there except strings as input parameters.

Say, we have a string where we search for a word stem. However this stem does not appear in its “stem” form, but always with some suffixes. Let our stem be “spd” (the name of the German Social-Democratic party), and (for simplicity), we’ll assume two “instances” of “spd” that occurr with suffix, ie., “spdbt” and “spdde”. (I was just working on a text mining on Tweets of German politiicians, hence the example).

Task 01: Extract the “spd” stem out of the data

Non-programmatically, ie., interactively, this is quite straight-forward. Some knowledge of Regex is helpful to render the task a bit more general:

\\w means “find a word-character” (ie., letter or digit), and + means that at least 1 hit is expected. pattern is the pattern to be looked for and string defines the string where to search for the pattern.

Task 02: Make it a function

Obviously, a function is much more general. Say we have 10 parties we would like to warp through; it becomes tedious to repeat that code many times. We will want a function. How to do that with dplyr?

See whether it runs:

When working with NSE, it is important to distinguish between expression, strings and evaluation. Using NSE, we can look at the parameters of a function, and grap the parameters before they are evaluated. That’s why the parameters need not be well-behaved, importantly, they do not need to have quotation marks, which saves typing for the user.

From the perspective of the R-interpreter (the machine), the steps of action looks more or less like this:

In this post, we will explore some date and time parsing. As an example, we will work with weather data provided by City of Nuremberg, Environmental and Meteorological Data.

We will need these packages:

As there was some strange, non-UTF8 character in line 12, we just skipped this line. As this was the row with the column names, we informed read_csv that there are no col_names (using col_names = FALSE). Also, some missing data occured. Luckily, readr takes care (despite of a lot of warning output).

Unfortunately, R has not yet reckognized that the first column consists of a date/time object. So let’s tell her:

OK, now let’s look at the precipitation in Nuremberg.

Easy enought, this little sweet function tells us whether a given year was a leap year or not.

Let’s visualize whether a day was dry or not. First, we compute a variable rain_today. 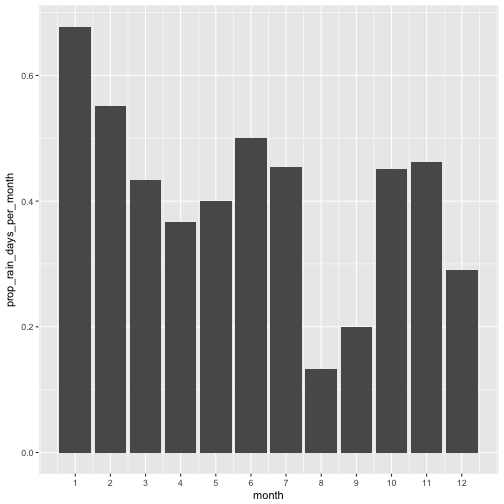 August and September then were quite dry, it appears. Let’s look at the amount of precipitation for comparison. 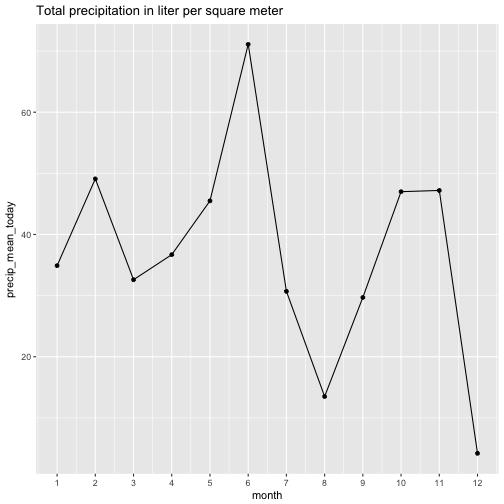 For the fun of it, let’s prepare a more nuanced picture. 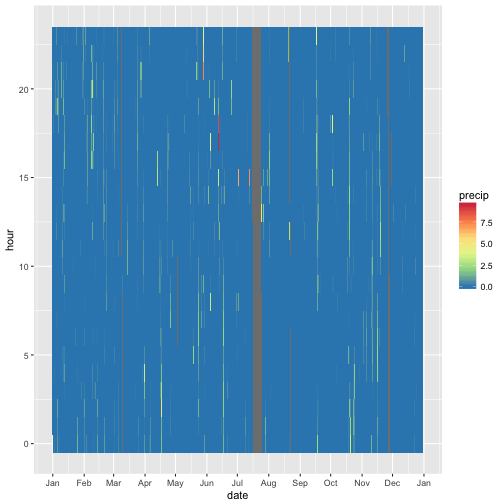 Hey, in June there must have been some heavy raining. Let’s zoom in. 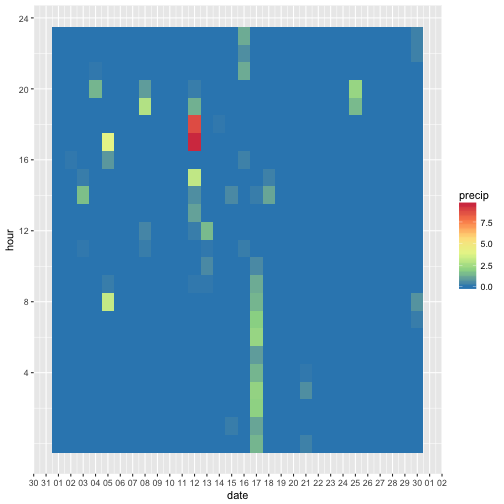 Most of the days in June were dry, but on one day, heave rains occurred on the 12th or 13th in the late afternoon.

Is there a preference for time in terms of precipitation? Maybe it rather rains in the late afternoon in general? 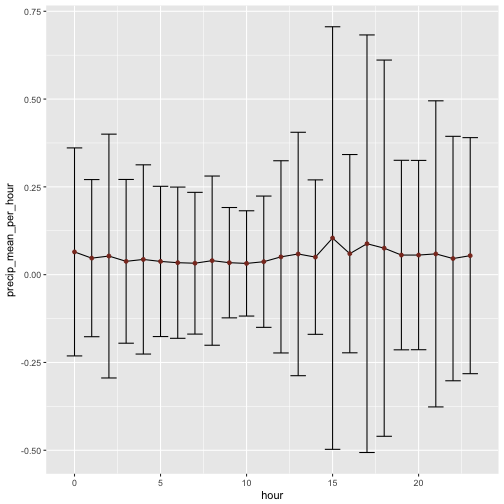 Hm, not much difference between the hours. But the variability seems to differ quite some bit. Would that picture change if we consider only days with precipation? 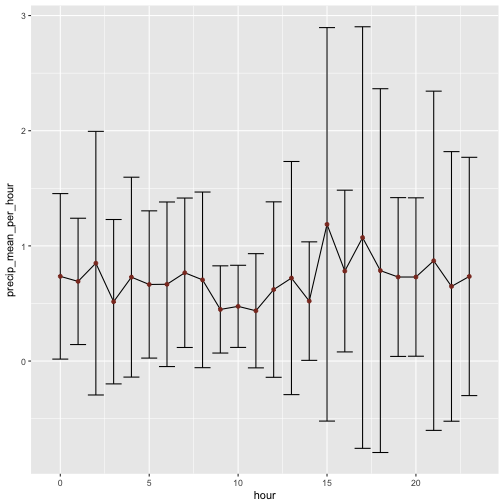 Not too much difference in the overall pattern. But what about if we look at the median and IQR, instead of mean and sd? 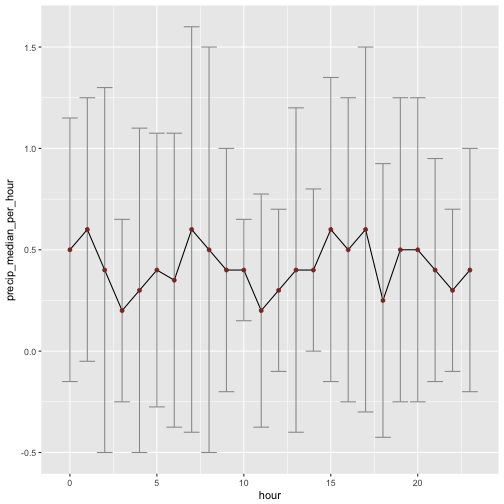 That the pattern breaks down essentially. Not that much difference between the hours left. Maybe 10:00 is rather dry, but that may be sampling errror of this year.

Recently, since dplyr <= 0.6.0 a new way of dealing with NSE was introduced, called tidyeval. As with every topic that begs our attention, the question “why bother” is in place. one answer is “you’ll need this stuff if you want to lock dplyr verbs inside a function”. Once you like dplyr and friends, a natural second step is to use the ideas not only for interactive use, but for more “programming” type, ie., writing functions.

The topic of this post is to explain some of the ‘tidyeval’ thinking. That is, let’s write a function using tidyeval thinking.

As an example, assume we want to have a function that takes two numeric vectors (ie., two groups), performs all pairwise comparisons (>), and returns the proportion ‘favorable’ for the first group. Say, out of 20 comparisons, 16 showed that group1 > group2. Hence, the ‘proportion of favorable comparisons’ would be 16/20 or .8. This measure can be seen as an effect size for the Mann Whitney U Test, Wilcoxon Test or even some type of rank biserial correlation. See the nice paper on the “Simple Difference Formula” of Kerby 2014 for details and background.

Let’s take the mtcars dataset, I know it’s boring, but instructive, I hope.

So, here comes the function prop_fav:

What did we do? Let’s look at the steps in turn:

With enquo we take the parameter of a function as expression. That means, we do not evaluate it, we just take the expression, leave it on hold, and use it later on.

Then we extract the values of group 1 and group2 out of the data frame (assumed tidy). In tidy data frames, each variable has its own column. So we need to do some work to get the values extracted.

See the !!; they mean “hey R, remember the expression I stored recently? Now take it, and ‘unquote’ it, that is, just run it!”. The double exclamation mark is just syntactic sugar for that phrase.

pull, also recently added to dplyr, pulls out a vector (column) out of a data frame.

And in the last bit, we take the two vectors, span a Cartesian product and do a comparison of each element. More bluntly, take the first value of group 1 and compare it with value 1 of group 2. Decide which is greater. Go on comparing value 1 with the rest of values in group 2. And then go on with the rest of the values of group 1 in the same manner.

For convenience, this function can be sourced like this:

Now, some examples. Comparing cars with 4 and 6 cylinders, how many of the 4 cylinder group has more horse power? Or, more precisely, “Out of 100 comparisons of 4 and 6 cyl cars, what’s the proportion of 4 cyl cars having more hp (than the 6 cyl group)?”.

Let’s look at extraversion, coming from this dataset:

Let’s compare women and men to see how is more extrovert.

Women are about as extroverted as men.

Men have slightly more Facebook friends (in this sample).

Note that this measure can be applied for non-metric, ie., ordinal variables. It is quite straight forward, that makes it easy to comprehend.

Using tidyeval can give a headache at start, but it is worthwhile if you want to dig deeper, and write your own functions. However, there may be some similar alternatives such as wrapr::let, see here.

The Mann-Whitney U-Test is a test with a wide applicability, wider than the t-Test. Why that? Because the U-Test is applicable for ordinal data, and it can be argued that confining the metric level of a psychological variable to ordinal niveau is a reasonable bet. Second, it is robust, more robust than the t-test, because it only considers ranks, not raw values. In addition, some say that the efficiency of the U-Test is very close to the t-Test (.95). In sum: use the U-Test.

Idea of the U-Test

How is the test computed? In essence, that’s easy:

How to achieve that in R? Try this code. Say we have two groups of runners (100m), and we record their running time (in seconds):

How man comparisons do we have?

I need the pipe for that…

So we now have the sum of “wins”; getting the proportion is easy, just divide by the number of comparisons.

Computing U the standard way

Let’s compare that to the more “traditional” way of computing U.

U is given by

Let’s compute the rank sums for each group.

Note that we are not considering ties here for the sake of simplicity.

Now compute the sum of ranks grouped by groups.

Applying the formula above we see that the rank sum for g1 is 19, subtracting the min rank of 15, we get a value of 4. This number is equivalent to saying that out of 20 comparisons, g1 lost 4 (and won 16). U is obviously synonymous to saying “how many comparisons were lost”.

The proportion of favorable comparisons can be gauged a “common language effect size” (CLES).

As an effect size for non-parametric two-group comparison scenarios are quite often neglected in standard text books, I think it is helpful to ponder the CLES idea presented by Kerby, and put forward earlier by McGraw and Wong.